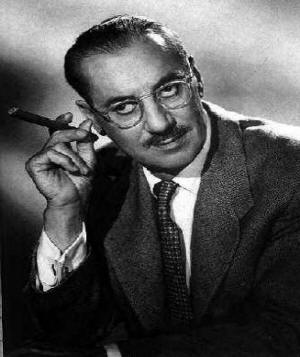 Many people, when they think of Groucho Marx, remember the Marx Brothers Films and You Bet Your Life his TV show, which is still shown in reruns somewhere on the planet. One can today, tune to American Movie Classics, and find a Marx Brothers Film playing at some time. Groucho was also a great writer. He wrote at least two autobiographies Groucho and Me, Memoirs of a Mangy Lover, and a book of letters: The Groucho Letters in addition to other books, which can be found in The Library of Congress. All that writing from a man who never graduated from grammar school, and all his books were best sellers. Many of them have been reprinted.

I can say that The Grouch Letters is one of the best books I've ever read.

The following are excerpts from The Groucho Letters.

Since being inactive as a performer I've done quite a bit of scribbling. This is my fourth year writing a column for Diners' Club Magazine.

Will you please send me as quickly as you can two lines which brought the biggest laughs. I would appreciate for my next column.

Briefly (and quickly) the two biggest laughs that I can recall (other than my three marriages) were in a vaudeville act called Home Again.

One was when Zeppo came out of the wings and announced, Dad the garbage man is here. I replied, Tell him we don't want any.

The other was when Chico shook hands with me and said,I would like to say good-bye to your wife, and I said, Who wouldn't?

Take care of yourself.

TO STANDARD OIL COMPANY OF CALIFORNIA

In your statement to me this month, you neglected to sufficient postage on the envelope. This meant that I had to scurry around to find four pennies to drop in the mailbox for the postman.

Inasmuch as I am a new customer, I believe that if there was a doubt in your collective minds regarding the amount of postage required, it would have been wiser to overstamp the envelope, rather than vice versa.

I realize that the running of your giant company involves many hazards. I, therefore, do not wish to be reimbursed the additional four cents. Instead, I suggest you take this money which, legally, you owe me, buy a four-cent CARE package and send it to the president of your company.

My Father met your brother Gummo here in Palm Springs, and he said that if I would write to you, he was sure you would send me an autograph. I like your shows a lot.

Confidentially, this Gummo comes from a long line Rumanian Gypsies; he was deposited on our doorstep at the age of fifty, and there's nothing we can do about it.

Here is the autograph. I would send you a lock of my hair but it's at the barbershop getting washed.

In these short letters one can see Groucho had a clear writing style. His humor is as enjoyable in his writing, as it is in The Brothers films, and his TV reruns. It is clear that Groucho was what he always wanted to be... a writer.

Links to other Groucho and Marx Brothers Sites